Well, Easter came and went - this year I was following Tom Wright's book on the Gospel Of John, John for Everyone and had timed it so that the crucifixion and resurrection narratives fitted in with the festival.  At Seaford Baptist Church, East Sunday was marked by the adult baptism of two people who had both become Christians "from nowhere" - one in particular told us how a year ago he was struggling in despair with everything in his life going wrong and excessive drinking, but now everything was new and fresh.

Since my last post I've been doing an online course in drawing pencil portraits by the Canadian artist France Van Stone.  Its been really good learning how to build up volume and form from pencil lines.  Here are two of my efforts, firstly  Phoebe Waller-Bridge as Fleabag (from the BBC 3 series) 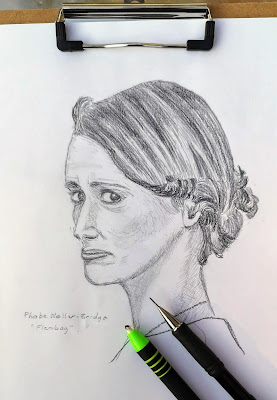 And another of the writer and speaker Jordan Peterson (I express no views on his opinions - he just had an interesting face). 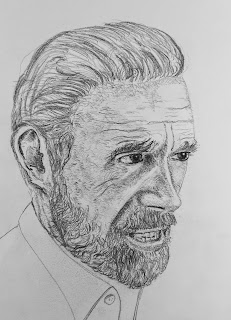 Finally, to add some colour to this post here is a painting I did in the garden of our lovely Clematis Montana - the blooms last such a short time I felt I had to try to capture them. 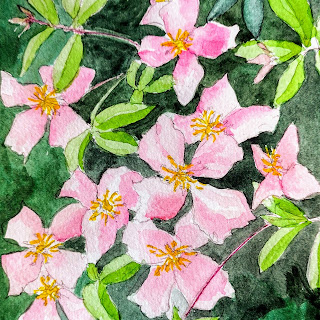 For those who read my previous post in which I mentioned my newly-aquired tortoise "Hilary", we have definitely agreed that he is a male not a female as we first supposed.  The behaviour in the video below apparently proves it.  Some people say its territorial behaviour but who can read a tortoise's tiny brain?  Anyway, he's providing us with a lot of fun and its surprising how much we've taken to having him wandering around the garden (now totally tortoise-proofed - or so I hope).