Dealing with a death in the family

Its been very difficult to find time for painting over the last month, due to a death in the family.  My cousin died in a town about 40 miles from me.  I wasn't exactly "close" to him but had kept up a relationship after many years and because he was a single all his life we tended to invite him to visit us from time to time and spend the weekend.  My cousin had many interests but after his parents died he found it difficult to cope with organising his life and when he got the first inkling of cancer, he more or less decided to take the ostrich approach and not accept meaningful treatment.  A year later he was gone. 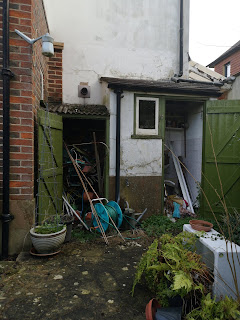 Because I was his next of kin I (and another cousin) have had to spend the last three days going through his house. It has been a dispiriting experience - the whole place was in a terrible mess and I had to wear rubber gloves for much of the time.  He had never seemed able to throw out anything from his parents life (even though they died 12 years ago), or his own and this went to the extent that when he bought a new jacket, he would just add it to his every growing collection.  One wardrobe was full of worn-out Harris Tweed sports jackets going back years and years.  Another had his father's old suits and his mother's ancient fur coats in it.

I also had to deal with the sheer accumulation of pointless collections.  Hundreds of old coins - not valuable ones, but just the now out-of-date variety from 20-30 years ago.  Countless old magazines and journals.  Old clocks and watches - none of which had been kept nicely but just stuck in cupboards or in the loft.  Barometers galore - not even nice ones, just rather dated instruments made of mahogany and all showing different barometric pressures.  The vast majority of my cousin's stuff would be what I would call "car-boot" category where you'd get a couple of pounds for each one.

Add to that hundreds of dust-covered CDs and DVDs which even a charity shop won't accept in these days of media-streaming.  There were literally thousands of books - we found 30 boxes of 100 each in the loft (each box with a nicely indexed list of its contents on top!).  I don't even know how we will even get them out of the loft  and we'll have to leave it to the house-clearance specialists.

Even the house is dilapidated with huge subsidence cracks running through it.  We had a surveyor in yesterday who told us that it couldn't be sold as a habitable home but would have to go for auction or as a cash-sale to a builder.  And this is highly prestigious private road with beautiful properties all around.

After three days of this I am just feeling so weary of seeing the contents of a life displayed like this. My wife and I are already enthusiastic de-clutterers (Marie Kondo's programmes on Netflix are just up our street!), but I have come back this evening wanting to take an even closer critical look at my possessions.  I want to leave as small a foot-print as possible on this planet when it comes to my time to depart.  Our lives do not consist in what we own or keep but in our experiences, our memories and our relationships.  The rest just tarnishes and dulls leaving dust-covered heaps for someone else to clear up.  As Jesus said in the gospel of Luke, “Take care, and be on your guard against all covetousness, for one’s life does not consist in the abundance of his possessions". 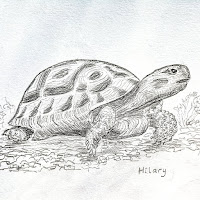 The only bright spot is that we have now adopted Hilary, Gerard's 60 year old tortoise.  She has settled in very well here. It took me a while to tortoise-proof the garden but it was a delight last weekend to see her walking around exploring her new domain and looking perfectly at home here.  Here is a drawing I did of her.  Another generation of children is now feeding her kale and tomatoes, fascinated by the way she pops her head out of her shell and takes whole cabbage stalks from their hands.