Its good to put Christmas behind and to think ahead to the New Year.  I began 2019 with two paintings of buildings – the Pilot Inn at Eastbourne and the Quaker Meeting House at Bridport.  For both these images I used Google Streetview as the source for reference photographs and as I did this I realised that I could do a street scene of virtually anywhere in the world thanks for Streetview.  For someone who’s travel options are rather limited due to disability in the family this is a great option.

Anyway, here is the Pilot Inn – always a nice pub to call in on and located just a few minutes from the cliff tops and the sea. 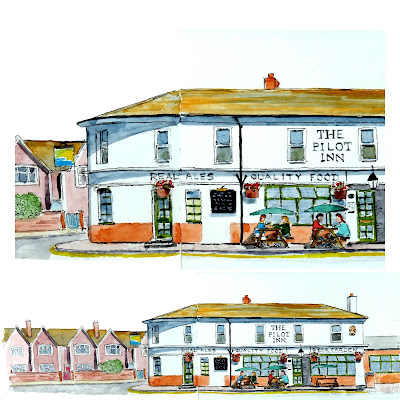 I have been involved with Quakers for many years now and although I have had a long break from actually attending a meeting, I have been to my local Quaker Meeting a couple of times in the last few weeks.   Quakers have been meeting together since the 17th century, when George Fox, their founder toured the country gaining converts.  It has changed greatly since his day and is now part of the established religious scene in Britain – although a very small part with most meetings being fewer than 20 members.

Here is the Quaker Meeting House in Bridport, Dorset. 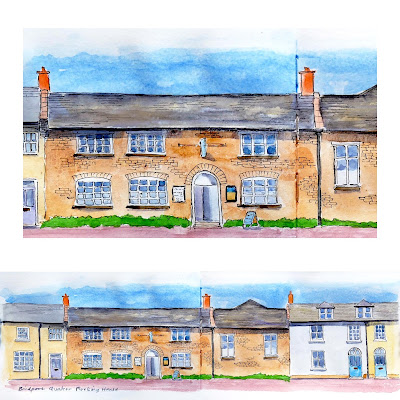 Quaker Meeting Houses are usually quite ancient buildings and painting the Bridport one has made me think that perhaps I’ll do a few more.
Posted by Tom Cunliffe at 11:48