I have been watching a series of programmes on BBC about people who escaped from German Prisoner of War camps (in World War II) and then had to travel immense distance, often across mountain ranges, in order to get home.  We have heard of people who had to travel down through Italy and crossing the Dolomites, others for whom the Alps were their greatest challenge, but this week I watched an episode about the freedom trail across the Pyrennees from France into Spain (the Spanish never joined with Hitler and so were neutral territory).

I have been across the Pyrennees myself but in a car and remember the long and winding road running alongside deep chasms with views of long ranges of mountain peaks.  What forbidding country it is.  Anyway,  I felt inspired to seek out a scene I could paint of this spectacular countryside and soon found one on the website of Collett's Mountain Holidays.  Here is my painting, followed by the photograph on which it is based. 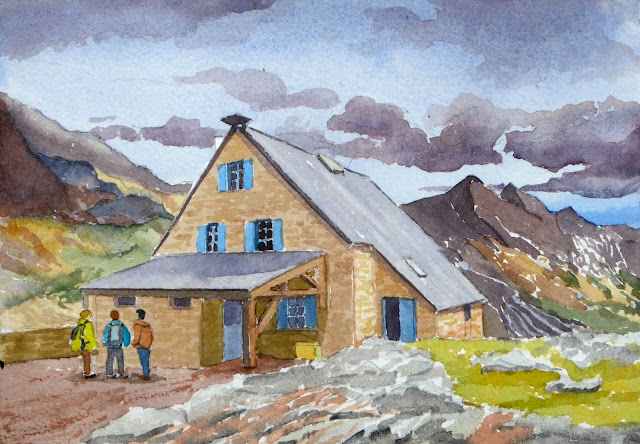 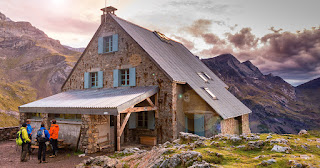 On gentler territory, the fine weather we have had this week encouraged me to paint from a photograph I took a couple of years ago of two women walking on Lullington Nature Reserve, near where I live in East Sussex. 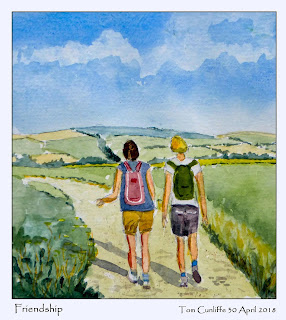 This is so typical of the countryside around here - chalky paths crossing gently rolling hills, always with white cliffs and blue sea in the distance.  I hope these two enjoyed their walk on the South Downs Way - they seemed to sum the easy companionship of two walkers on a fine morning, in no hurry to get anywhere.