The bridge at Ronda, Spain

Still watching the BBC TV series Great Continental Railway Journeys with Michael Portillo which I've got stored up for watching at my leisure. The episode on Southern Spain was full of images which you could paint if you wanted to - the flamenco dancer dancing with a specially trained  Andalusian horse, the fair in Cordoba, the wonderful buildings in Seville.

However, this bridge in Ronda grabbed my attention first and so I had to have a go at it.  The first job was to do a drawing. 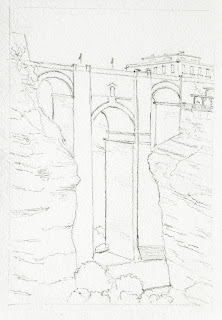 Not too bad, but then I had to work out how on earth to tackle those cliffs!  I painted them first with a loose wash, varying the colours from Raw Sienna to Raw Umber with bits of Alizarin Crimson and French Ultramarine to give some variety.  After that it was just a matter of adding more layers to bring some definition into it.  I don't usually work into a painting like this but with this one it was never just going to work with only one layer of paint. 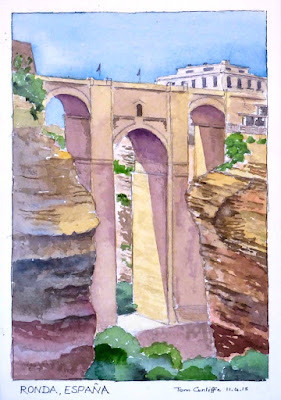 I'm reasonably pleased with the result but if I was to do it again I would try not to put so much detail in the cliffs as they could be a little overdone.

Here is a photograph of the bridge from a different position 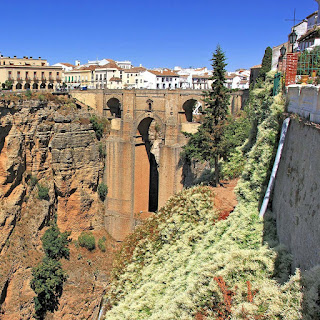