In my daily readings I've been working through the book of Ezekiel with the John Goldingay's wonderful book Ezekiel for Everyone by my side to guide me.  John has a very historical approach to the Bible, looking at is firstly as a record of an ancient people and then finding those aspects which may apply to us today.  There is a lot in Ezekiel about angels and other spiritual creatures such as "cherubs" and "cherubims".  Forget about rosy-cheeked winged babies fluttering around paintings by Venetian masters. Ezekiel's cherubs are fearsome creatures with faces of lions and wings like eagles, which make you collapse on the ground in fear when you see them.

I did a bit of research and found that these creatures are found in the art of many Near Eastern cultures and in fact the Phoenicians of roughly Ezekiel's time were carving images out of ivory which resembled Ezekiel's visions.  Perhaps they were a frequent sight in those days!

Anyway, they looked pretty good to paint so hear are two Phoenician cherubim from the archealogical site at Arslan Tash in Syria, drawn in pencil then painted with watercolour. 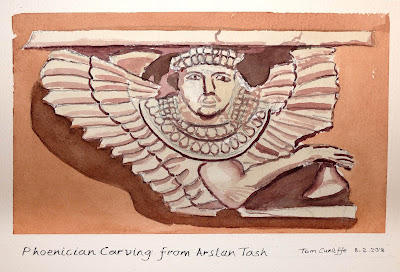 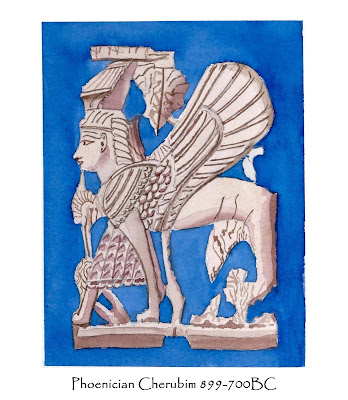