Its always nice to get out and about with sketchbook and pen. I went up to Seaford Head with Margaret last week, on a beautiful sunny day, and sat at a picnic table drawing the view up the Cuckmere Valley.

The wide-angle camera lens doesn't do justice to the rolling hills however and has the effect of flattening everything out. 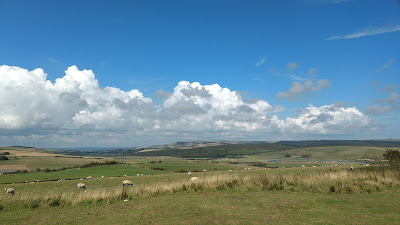 I much preferred drawing it and focusing on the distant hills, while also getting in a more panoramic view in my Moleskine watercolour sketchbook.

A couple of days later I found myself with an hour to spare in nearby Brighton (while Margaret took t the grandchildren to the cinema) and so sat in the Old Steine gardens and drew a couple of buildings.  No time to colour them in, so I did the watercolour painting when I got home. 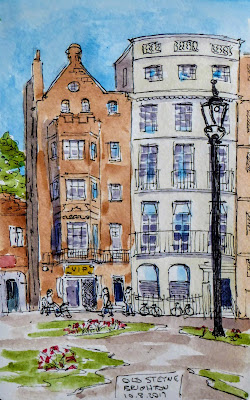 I made the lampost far too big and shoujld have done better with the foreground generally, but time was short and this was the best I could do. Here is a photograph of where I was painting from 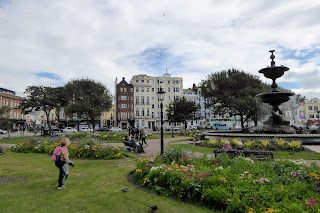 If I'd had longer I would have added the fountain in but it was really quite tricky with fish curled around the base.  A job for another day perhaps.